The Palace’s earliest date is from 1164 when the fief of land was mentioned as belonging to the Counts of the Alberti family noted in a document signed by Federico Barbarossa (Red Beard). The Alberti Counts were from an important noble family who owned many castles along the Arno river and in the Elsa and Pesa valleys.

Between the end of the 13thC and the beginning of the 14thC, Certaldo fell under the influence of Florence and the Alberti’s castle was confiscated and turned into a public building. As one of the coat of arms confirms, the first Florentine Vicar arrived in Certaldo in the year 1415. The Vicar was the magistrate charged with the local legal administration. This marks the beginning of Certaldo’s medieval “heyday”.

The Vicariate ended in the 18thC, after years of reducing its powers and boundaries, and was suppressed in 1784. Afterwards, the Palazzo Pretorio was emptied of all its furnitures and then sold and converted to private housing. In order to preserve its history, the Certaldo community purchased the building and began to make renovations in 1890.

Today, the Palazzo Pretorio’s main façade and its inner vaults proudly display numerous coats of arms frescoed, in stone and of glazed terracotta which once belonged to the Vicariate families who ruled in Certaldo on behalf of Florence from the late Middle Ages to the late 18thC. Considering that the Vicar was in power for only six months and that the Certaldo Vicariate endured for over three hundred years, we can only imagine how many coat of arms were unfortunately lost.

Near the Palazzo Pretorio, the-now deconsecrated medieval church building of San Tommaso and Prospero houses the splendidly well-preserved 15thC frescoes and sinopia under drawings of the “Tabernacolo dei Giustiziati” (Tabernacle of the Executed) painted by the Florentine Renaissance artist Benozzo Gozzoli. The tabernacle was originally erected at the foot of the hill, along the banks of the Agliena river, where those who were sentenced to death said their final prayers. In order to preserve this important work of art, the frescoes were detached from the tabernacle’s walls and moved to the church. Today, that original tabernacle is still visible near the bridge over the Agliena river, in the lower portion of the town. 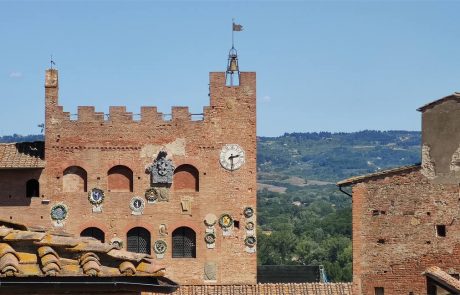